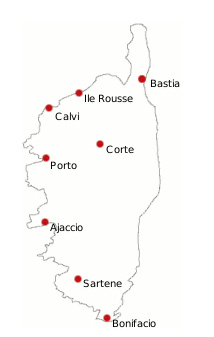 also known as the "Ile de Beauté" – the "Island of Beauty".
The best time to go is probably in May and June. During these months, the incredible splendour of blooming flowers and bushes await you and the temperatures are not yet too extreme.

Hardly any other destination has such variety to offer as this French Mediterranean island. The North stands out with its rough landscape and the Genoese influenced island capital of Bastia, the flatter East excels with its countless sandy beaches. In the West, the tourist will find a rugged coastline with beautiful beaches, while in the South, high over the sea on a chalk cliff, the city of Bonifacio perches, the most impressive town on the whole island. The island's interior offers secluded upland valleys and massive rock formations.


Our destination is LFKC and Calvi

In the northwest of the island is the airport Calvi Sainte-Catherine (about 7 km southeast of the city). 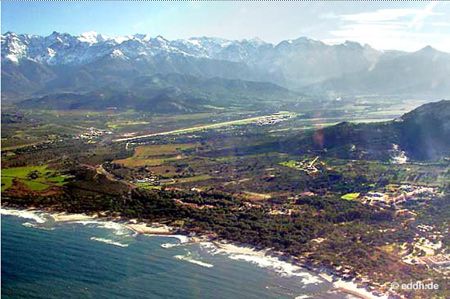 Approaching from the north, you can see Calvi's Citadel, the landmark of Corsica's fourth largest town (about 4600 residents) from many miles away,

It stands on a rocky outcrop and its powerful bastion has defied numerous attacks during its long history. Within its walls is the old town of Calvi, the so-called Upper Town.
Calvi is, however, better known to the owners of offshore sailing and motor yachts. This is because the sailing port of Calvi is the most popular on the whole of Corsica. Ajoining the port is the promenade and then the narrow streets and beautiful houses of the Lower Town, where you can take a stroll or find a bench at the harbour or stop at one of the many bars or restaurants and watch the world go by.
It is here that we find our 5 star hotel "La Villa", well-located and with a magnificent view! Let them spoil us here! 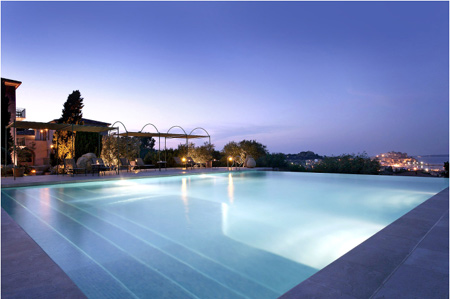 Our "program" isn't quite ready yet, but you won't be disappointed!

Perhaps we will be visiting the prehistoric remains at Filitosa? Human settlements in Corsica can be traced back some 9000 years. An impressive testimony to this early historical period is the sanctuary at Filitosa.

This hill in the lower Taravot valley, with its mild climate and fertile soil, was occupied from about 6000 BC to the early Roman period with only short interruptions. After that the place sank into oblivion for almost 2000 years. In 1946 Charles-Antoine Cesari discovered four menhirs in his fields, triggering the most important prehistoric archaeological excavations on Corsica.

Corsica has been inhabited for thousands of years. The indigenous people were displaced by immigrants as early as 6000 BC. Again and again, the island was under foreign rule. The Greeks were followed by the Vandals, East Romans and the Goths. In the Middle Ages, the rule of the Roman popes was followed by that of Genoa. But the Corsicans fought for their independence, finally gaining it in 1755. There are many books about the history of Corsica, and especially about the island's undoubtedly most famous son, Napoleon Bonaparte.

Towering about everything in the centre of the island is an alpine mountain range with the Monte Cinto reaching up to almost 2800m and with its peaks, valleys, canyons and forests, fascinating not just regular mountain visitors.

Or do you like canyoning?
The focus is on the sporting challenge (adrenalin), and nature.

Whatever happens – there will be a surprise awaiting you!

It goes without saying that good food and drink will play a significant part on this Corsican Fly-In!

To make sure you don't miss anything, you will have to plan ahead and register punctually. You will be receiving more information in a separate invitation.

Look forward to a delightful reunion - this time on Corsica!