A travelogue by Dr. Michael Offermann

A travelogue by Dr. Michael Offermann

Anyone who claims you can’t get permission to approach and land in paradise is wrong!

Paradise has even got an ICAO call sign: LIQS

And since the Lord, as is well known, once flew a Malibu (or maybe incognito still does – what a daring but equally smug hypothesis!) He had the runway lengthened and the Italian controller instructed at a papal briefing (after all dozens of Popes did come from LIQS), in spite of problems caused by Italian military aircraft, to lure on 25th June, 2004 some 15 Malibus into paradise.

The first impression of paradise in June was not, by the way, a visual or acoustic one. No, it was more “nasal” in nature. 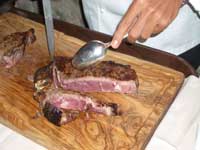 As soon as the cabin door had been open, a smell swept into the air-conditioned cabin. A smell which instantly out-did the beguiling magic of the ever-popular scent of kerosene: The smell of thyme, the same which would the next day rise from the Florentine T-bone steak, one of the culinary specialities of Tuscany – Bistecca Fiorentina.

And, as always when angels travel, local conditions were of course more than satisfactory. 30°C throughout, sunshine and cool wine, as well as seductive couriers…

And the micro cosmos, the Hotel Relais Borgo San Felice, on the hills of the Chianti Classico, where our troupe of angels were allowed to rest their heads, was altogether not too bad. 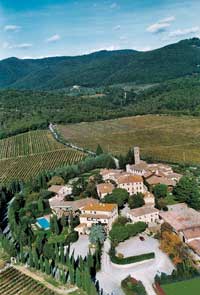 Our Tour Operator, whose day job is being our President, must have had a devil of a time fighting, not for each soul, but for every cent to be saved and for each extra to be added to the arrangement – reception buffet, wine tasting, fuel for the return journey among other things.

Adam and Eve had to pay more. The exorbitant price they had to pay for an apple was, after all, expulsion from the Garden of Eden.

For us it was considerably cheaper and All Inclusive.

The reception with its Welcome Buffet served in the open air was already a dream straight out of 1001 Nights. The Orient has that sort of thing too.

The authors didn’t take in very much more either besides the Bible study, the praising of the Lord President and the drinking of sacramental wine, because – the only failing on the trip – apart from fantastic red wine, there wasn’t really anything else to drink. And we needed the twenty-fours hours prior to take-off to recover our true flying form.

In other words – a devil of a good weekend.

And the moral of the story is: To get into paradise, you can either join the Church, fast a whole life long, sing hosanna and be a Good Person or you can join the Brethren of the MMIG46. That way it only takes 2 hours and 20 minutes from Essen to touch down in paradise.

Feast yourselves now on the pictures of those holy places where milk and honey still flows.

Thanks and praise be to our High Priest and Organiser, St. Willi of E, he of the last piston engine of the fleet.

Tuscany Feeling, words which have developed into a much used expression in the last few years. For some it is a cappuccino on the Piazza del Campo in Siena or the silhouette of San Gimignano; for others it is the shiny golden Arno at dusk. For travellers, however, who love the originality and quietness of this landscape, it is the Hotel Relais Borgo San Felice on the hills of the “Chianti Classico”.
Set among wine hills and olive groves, the magical medieval hotel village is in a world of its own. It is a joy to take in the colours of the Tuscan countryside from the wonderful terrace, a sort of courtyard between the reception and restaurant “Poggio Rosso” with its red terracotta tiles and typical iron furniture: the vines with the fresh green, the cypresses with their darker, replete green, the silvery green olive trees which alternate with the vines, - a typical combination for Tuscany and unique in Italy.
It is very difficult to leave this peaceful place once one has settled down on the terrace to enjoy breakfast with plenty of fresh fruit, special sorts of homemade sausage or the delicious cakes and gateaux made by the French cake-maker Patrick Ravenet. Suddenly the cultural highlights and the numerous sporting activities available fade into the background.
Twenty kilometres away, Siena, which is considered to be the most beautiful town in Tuscany with its palaces and world-famous Campo „The Square of Squares” will probably still be there tomorrow. And so you settle down with a cappuccino or take some time to read a book.
And before you know it, it is time for a spot of lunch. But it’s hard to choose between the ever new dishes of the day, the Specialita Toscane, and the à la carte specialities of the chef Antonio Fallini.
You must be sure not to miss creations like Ravioli di Malanzane e Ricotta al Sapore di Basilico (pasta filled with aubergine and ricotta cheese with basil sauce) or Filetto di Spigola al Cartoccio con Patate e Finocchi (sea perch fillet in a paper cover with potatoes and fennel).
The secret of the chef, who this year returned to his native country after numerous positions in the best houses of the world, is in fact quite simple but yet so complicated. Top of his list is absolute freshness and only the very best quality for his ingredients.
He gets fruit and vegetables of the season from local farms in the surrounding countryside, because practically everything his ever-changing cuisine needs in the form of fruit and vegetables grows here. Fish and sea food arrive daily from the fish markets only an hour away at the coast. The famous strong, white, beef cattle of the Chiana valley provide the excellent meat, but not only for the sonorous bistecca fiorentina, the Florentine steak.
The basic ingredient in all dishes is olive oil. Not just any olive oil but the olive oil they produce themselves. The San Felice vineyard, to which the exclusive hotel belongs, pays special attention to the production of olive oil. The earth and the climate conditions provide the best prerequisites to satisfy the highest demands in quality. All olives are harvested by hand and cold pressed in their own oil mill according to ancient traditions. As it was a hundred years ago, the oil is then filtered through cotton cloths. A painstaking process – but a worthwhile one, as one can taste.
The final touch to the dishes comes with the addition of numerous herbs, which grow just behind the kitchen in the “Herb Garden”.
The guests can have the delicacies from the cellar and kitchen served in the shade of ancient oak trees. After a short walk through the wine hills the guests can discover the delights of the Chianti region for themselves.
The regional specialities taste doubly good out in the air of the forest and the meadows, while the personal and friendly service means that no wish goes unattended to.
After a short siesta in the shade of the trees at the pool you wander through the medieval village with its typical Chianti buildings, out of which the hotel was created, special care having been paid to the maintenance of the old fabric. While strolling though the narrow streets and over the Piazza San Felice with its church and the Palazzo of the former vintner family, you discover a romantic space around every corner. Here a niche overgrown with ivy, there some steps covered with roses, or a backyard where countless hydrangeas and begonias are in full and splendid flower.
You also feel the attachment to the region in the forty rooms. The spacious, bright rooms and suites radiate discreet charm and simple elegance under old beams and high brick vaults but there is no lack of modern comforts.
Of course, the name of the restaurant is a clue to one of the owner’s greatest triumphs. The "Poggio Rosso" is a Chianti Classico par excellence. With its full flavour, its ruby colour and its bouquet of violets, it is only produced from the grapes of the "Poggio Rosso" in limited quantities and only during particularly good years.
The vineyard of San Felice has now had for more than a hundred years wine hills which face the south and southwest and, thanks to the soil quality, favourable climate and the optimal altitude, produce first-class, prize-winning wines. Anyone who would like to learn more about Chianti wine and its traditions can visit the impressive wine cellars and vineyards.